The Museo Internationazionale Italia Arte (MIIT) in Turin, Italy presented four simultaneous solo exhibitions on July 4, 2014. The exhibitions, which are part of the museums ongoing programming, included works by three Chicago artists and one Italian artist. Each artist was invited by the museum’s director Guido Folco for a solo exhibition as part of a long term collaboration between the MIIT of Italy and both 33 Contemporary Gallery and the Zhou B Art Center from Chicago. This collaboration which has at its purpose the cultural exchange between the cities of Turin and Chicago began four years ago and has produced multiple exhibitions in both cities. 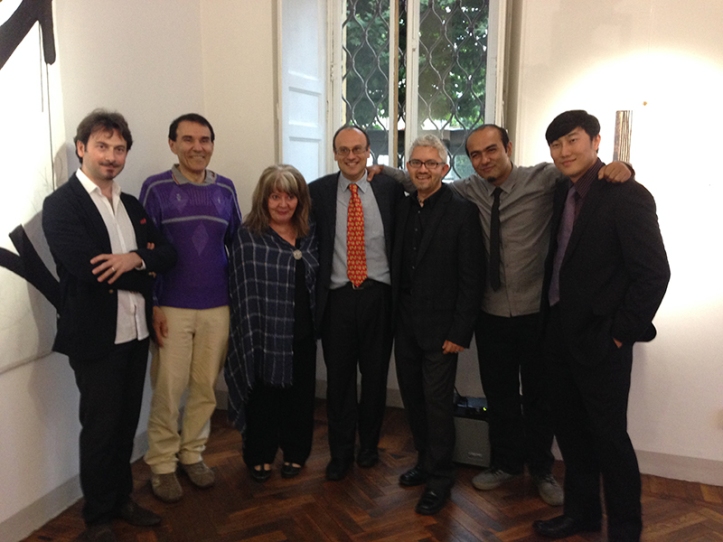 Opening in the first gallery and welcoming the public was the solo exhibition of Chicago based artist InJung Oh. Her solo presentation titled “Volossom” included five new oil on canvas paintings of her ongoing Volossom series. This beautiful exhibition provided the viewer with an opportunity to experience first hand the work of a talented Korean-American artist whose work explores femininity, spirituality, motherhood, and power roles among others. At the center of Oh’s solo project was a colorful painting titled Volossom which depicts a floating organic form that appears to elevate as it grows into a beautiful flower-like shape.  Volossom (a name given by the artist which refers to a manifestation of will or wish) takes on a new visual form that symbolically elevates the viewer into an elegant and beautiful sense of hope and liberty.

Following Oh’s exhibit, Milan based artist Brigitta Rossetti presented a solo project titled “Children’s Garden” which included three mixed media works on canvas. Two of which measured approximately eight feet in height and included two small child-size chairs as part of their installation. An additional painting and a small three-dimensional work were also included in her solo presentation. Rossetti’s work evoked nature as its main protagonist while touching on the sensibility of our existential reality. The expressive qualities and the spontaneity of the work provided a sense of intimate personhood while the absence of any figurative forms, reminded us of it’s existence. Particularly, the small child-size chairs in front of the large scale works created a strong visual and conceptual contrast between our present reality and our lost childhood memories.

In the adjacent gallery across from Rossetti’s works, Mexican-American artist based in Chicago Sergio Gomez presented five new paintings on paper made specifically for this exhibition. The main title of Gomez’s solo project was “Contradictory Revelations”. Each work measuring life-size proportions alluded to the human form as a point of departure. Although, figurative in essence, each expressive and abstract work dissolved the human figure into an array of melting colors and disappearing forms. At the heart of Gomez’s work, the element of light proposed a sense of spirituality. The light emanated from within the center of the composition and served as the illuminating source for it. Strategically, the viewer standing in the gallery, was confronted and surrounded by the works which reminded the viewer of life’s own existential questions such as suffering, joy, birth and death, all within arms reach of the viewer.

In the last gallery leading from the main corridor, Chicago-based artist Mario Gonzalez Jr presented a solo project titled “Grafitto.” Gonzalez’s letter forms abstraction paintings, varying in size from small 8×10 inch panels to a large scale mural size work, surrounded the gallery with a visually playful urban feel. Despite that the letter forms in Gonzalez’s work are derived from his experience as graffiti writer, they take on a refined form in his recent works. Not to be confined to street art, these paintings embody an expressive and modern simplified abstraction austere of chaotic compositions. Instead, Gonzalez’s fast paced brushstroke masterfully lands in its proper place providing a monochromatic composition that is layered and varied while retaining a sense of balance and visual unity.

This exhibition curated by Guido Folco continues the collaboration between the cities of Chicago and Turin and makes a strong statement of the diverse artistic expressions of both cities. These solo exhibitions will be on view at the MIIT Museum in Turin until July 31, 2014. 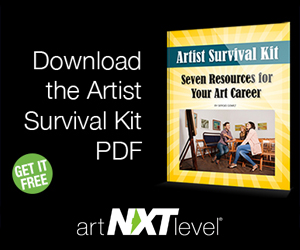 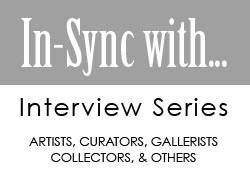